Other dogs love to nap or play fetch, but this pooch has an unusual hobby, and that is picking up tree branches. After his mom made him an Instagram page, he became a hit on the Internet as he amazed thousands of people with his determination.

His name is Bosco, a Dachshund who was never taught to pick branches. It is something he learned by himself. Every time they went out, Bosco would bring his mom sticks. And it amused her mother of his perseverance.

That’s when she thought to set up a page for the hound that features videos and pictures of him as he struggles to carry the trunks in his mouth. 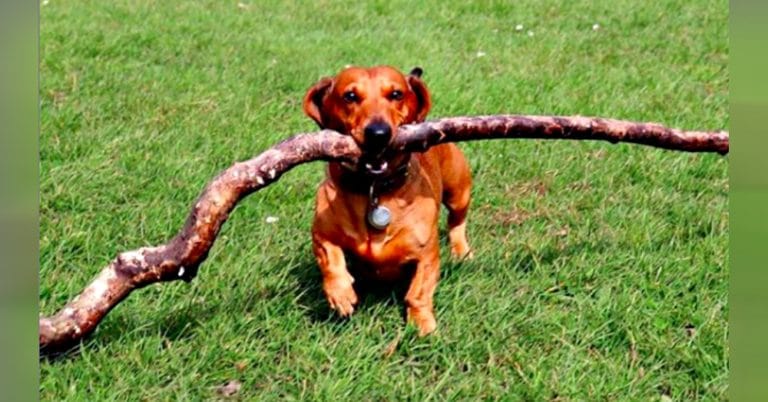 It seems that this pup’s motto is, “The bigger, the better” as he especially likes ones that are about three times his size. And sometimes, the branches still have leaves.

He can balance them perfectly in his mouth and can run with it.

In one adorable video, you’d see him running down a road with a large trunk with him and offers it to his parent as a gift. What a sweetie!

Another clip shows Bosco trying so hard in getting a small branch stuck on the ground. He cries as he delivers his best attempt that has his mom laughing. Although he was unsuccessful in removing it, he still got an A for his effort.

Bosco loves sticks so much, but there is one thing that he loves more, and that is his mama.

This hound brought happiness not only to his mom but to a lot of people. He showed too that aside from being good in entertaining audiences, dogs are inspirational. He moves us to take on bigger things.

We couldn’t get any prouder of this pooch!

Dog Took Good Care Of An Injured Fawn Until It Fully...

This Resort In Vermont Has Become A Mecca For Dog Lovers...

Boxer Destroys Thousands Worth Of Furniture And Gets Dubbed By His...